Every day they continued to meet together in the temple courts. They broke bread in their homes and ate together with glad and sincere hearts
Acts 2:46 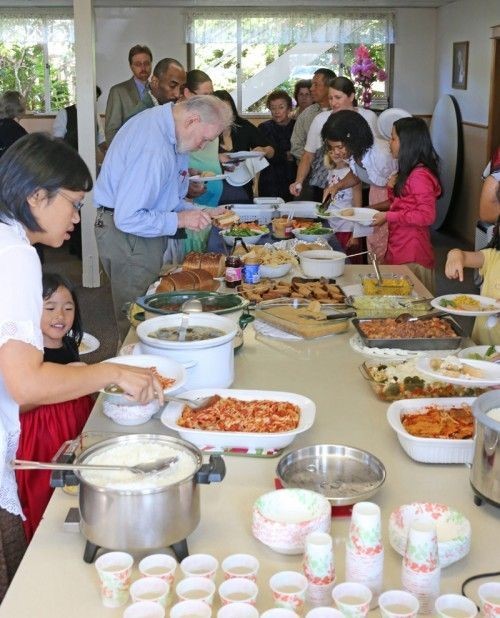 Lutherans are famous for their Potlucks.  Traditionally, the potluck will have at least one hotdish with cream of mushroom soup, and a side salad of Jell-o in the proper liturgical color.  It has been said by some that according to Lutherans the four food groups are:  coffee, lefse, lutefisk and Jell-o.

Our potlucks have evolved into something much more nourshing for the soul and body.  We have large gatherings of people with large amounts of food prepared by lots of people.

Adults are able to make conversations, exchange ideas.  Friendships are strengthened and renewed.  New friends are found.  All of that in addition to eating lots of food.

Children play.  They make new friends.  They, too, eat lots of food.

Lots of food and communal bonding are the hallmarks of a Lutheran potluck.

Come join us for one of our potluck meals!  Our Saviour’s Lutheran Church sponsors a potluck every fifth Sunday.  The meal is very informal.  There are always plenty of people and lots of food.

Advent is the season Christians observe the birth of Jesus and the coming of the Messiah. During December Our Saviour’s hosts Wednesday night soup suppers and worship services.

Lent is a time for repentance and preparation for Easter. Our Saviour’s adds special Wednesday night activities which include soup suppers followed by worship services.